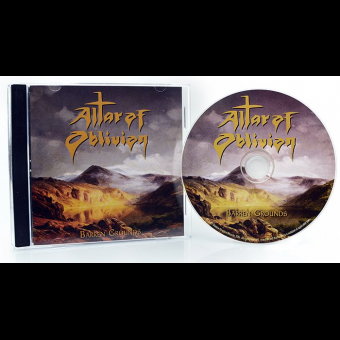 It's been four very long years since ALTAR OF OBLIVION's landmark Grand Gesture of Defiance, but the Danish kings are back to reclaim their throne with Barren Grounds! And although those four years have been quiet and could've spelled a change of course, ALTAR OF OBLIVION return rested and firing on all cylinders here, offering the same distinct sound as their celebrated pair of albums but perfecting it in a manner that's anything but barren. As emotional as ever and reaching equally for the heavens and hells, Barren Grounds offers four brand-new songs that span the signature ALTAR OF OBLIVION aesthetic. "State of Decay" begins the record quietly and then charges into molten heaviness, dynamically shifting gears, and often; "Serenity" is aptly titled, a placid instrumental that's the calm before the storm; the title track is pure emotional doom bliss, recalling the classic Candlemass archetype and arguably one of the band's best songs yet, while the hushed closer "Lost" is positively goosebump-inducing in its sonic loneliness. Altogether, and featuring the band's best and heaviest production to date, Barren Grounds makes for a completely satisfying mini-album experience: herald the return of ALTAR OF OBLIVION!

The title Legend Master is a telling one: here, TROLL dial back the swampier excesses of their more stoner-indebted work and aim for a more regal, prog-inclined style of doom. And yet, even with such a significant shift, the band's powers are truly hitting a fever pitch here, seemingly able to weave a majestic-yet-mournful tale at every turn. And there are five "turns" here, each of Legend Master's five tracks an expansive epic in their own right. With two songs clocking in at eight minutes and the other three topping 10 minutes, TROLL render the album a world unto itself; riffs lumber and crunch and then fold and wander, creating atmosphere and tension alike, as enigmatic vocalist Rainbo really reaches into his soul to deliver a goosebump-inducing performance like no other. After 52 minutes, you'll feel like you've gone on a journey of a lifetime, yet will be pressing "play" again immediately after: TROLL have truly become that engaging.
SHADOW KINGDOM is so confident in TROLL's Legend Master, it promises the album's like sipping a fine wine - subtly intoxicating, savory to the palate, ever mysterious to the very end. Adorned with a classy cover and spellbinding layout, Legend Master will surely put TROLL in the league of such luminaries as Pallbearer, Warning (UK), Solstice (UK), and the Lord Weird Slough Feg. Begin the journey to the Legend Master NOW!
Pozostałe produkty z kategorii 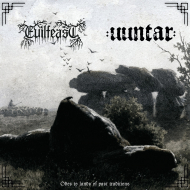 EVILFEAST / UUNTAR Odes to lands of past traditions SPLIT [CD]

NECROMANTIA To The Depths We Descend A5 DIGI [CD] 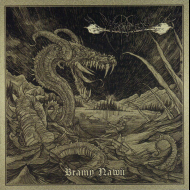