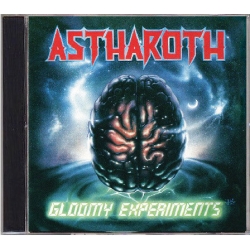 Zapytaj o produkt Poleć znajomemu Specyfikacja PDF
We are proud to announce our cooperation with legendary Polish thrash metal act ASTHAROTH to re-release the band's debut and only full length album from 1989, "Gloomy Experiments". Underrated and buried within the underground depths, we are thrilled to unearth this long lost gem of very complex, original technical/progressive thrash. Somewhere between the atmosphere of Voivod and the technical aggression of Kreator and Necrodeath, ASTHAROTH have the formula to deliver the goods, while managing to still forge a sound all their own.

For the first time since 1990, we offer this thrash masterpiece as a standalone CD, as the 2009 reissue which included some of the demo tracks was incomplete due to length. To remedy this, we are offering the band's complete "Wisdom of the Blind" 1991 Demo, "Limits" 1992 Demo and "Cycles of the Sphere" 1994 demo as a second CD. Additionally, the bonus tracks "House of Frustration" taken from the original demos sessions and "The Drunk Hate" which was only available on the Metalmania '89 compilation will also be included. Also for the first time ever on CD, the bands "Self Hatred" Demo tracks will be included.

Each CD features the original classic artwork, as well as lyrics, new liner notes, and tons of exclusive band photos. In addition, the layout uses original elements just like the original LP release by Metal Master Records, for complete attention to detail - even down to the typeface.
Klienci zakupili także