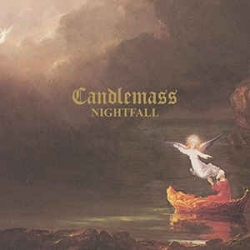 Mid-price CD edition of the definitive doom metal opus from the Swedish legends. Candlemass, formed by bassist and songwriter Leif Edling in Stockholm, Sweden in 1984, is well known for its influential Epic Doom Metal sound, which itself evolved out of the masterful Black Sabbath. 'Nightfall' was the second Candlemass studio album and saw its release in 1987. Alongside first album 'Epicus Doomicus Metallicus', 'Nightfall' was instrumental in shaping the Doom Metal scene that exists to this day. On 'Nightfall', making his debut with the band was vocalist Jan Alfredo Marcolin, better known as Messiah Marcolin, who became a well-established and highly respected vocalist throughout the Metal world, with his powerful soaring and theatrical tones. Messiah Marcolin became an iconic figure within the band until his departure in the early 1990s. 'Nightfall' is a continuation of the band's debut; with highly effective epic and melodic heavy doom compositions. The album truly helped define the genre and paved the way for Doom Metal's future, with bands such as Paradise Lost and My Dying Bride often hailing Candlemass as being among their primary inspirations.

Mid-price CD in digipack featuring the original artwork with an 8-page booklet.

OVER THE VOIDS Over the Voids (DIGIPACK) [CD]