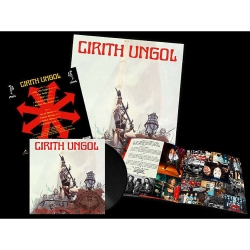 Yes, the rumors are true. Metal Blade has managed to find the holy grail of Heavy Metal, the album that hasn't been available officially for decades, by one of the best Heavy Metal bands of all time - 'Paradise Lost' by mighty CIRITH UNGOL!

Initially released in 1991 by Restless Records, Metal Blade has finally been successful in licensing the rights to this masterpiece!

The LP will be released featuring a special vinyl master, using the original (!) master tapes as a source, re-mastered by Patrick W. Engel at the Temple Of Disharmony studios, best sound guaranteed! The vinyls feature 400 g spine sleeves, a 12-page booklet and an A1 sized poster

Side A Side B:
Klienci zakupili także