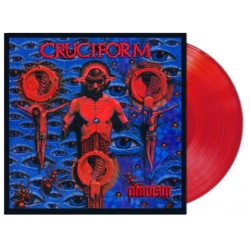 Zapytaj o produkt Poleć znajomemu Specyfikacja PDF
For the first time on vinyl, the official release of "Atavism", the only album ever released by Australian death metal legends CRUCIFORM. Cruciform is perhaps one of the most significant Australian metal bands of the early 1990s, playing a creeping and heavy form of death/doom long before most others. Cruciform could have gone on to take a serious role on the worldwide stage but internal conflicts sadly tore the band apart on the verge of international recognition.

The band developed a style similar to that of early recordings by Anathema and Paradise Lost featuring slow, lingering riffs and epic arrangements. They rose to the forefront of Sydney's metal scene with Atavism in 1993, the first release for Warhead Records. Atavism was distributed globally and received rave reviews everywhere.

This LP will compile the 1993 masterpiece "Atavism" and the 1995 "Paradox" EP that until now, was only released on cassette. Crushing old school Australian Death Metal.
Pozostałe produkty z kategorii