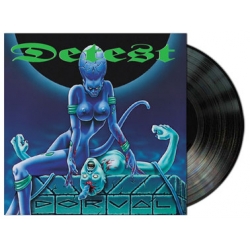 DARK SYMPHONIES / THE CRYPT is honored to announce our cooperation with Denmark based Sci-Fi Death metal act DETEST to reissue their 1994 debut and only album "Dorval" for the first time ever on wax!  We will be including their "DeathBreed" Demo 1992 also making its vinyl debut!

This deluxe 2LP will be designed after the original 1994 Progress Red release, taking elements from the original layout with attention to detail, even down to the logo and typeface for a touch of nostalgia. Also included are classic, unpublished band photos and brand new liner notes from original founding member John Petersen.