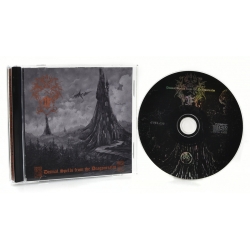 Hailing from Finland, DRUADAN FOREST originally formed in 1998 and released three demos before receding into the shadows later in 1999. In 2016, the entity was reactivated and released an EP and then two albums and, most recently, a split album with THE TRUE WERWOLF. Of course, between the two eras of DRUADAN FOREST, sole creator V-Khaoz was not idle, prolifically playing drums for such bands as Azaghal and many others as well as his various solo-projects - namely, the almighty VARGRAV, who've almost singlehandedly helped revive the symphonic black metal subgenre.

However, as DRUADAN FOREST, V-Khaoz explores the most mystical, folkloric realms between the shadows of black metal and pure ambient music. Some might brand his approach as "dungeon synth," but such a revisionist appelation sells short not only the man's decades-deep investment in these realms, but more so that DRUADAN FOREST thus far have safely eluded simple genre categorization: although most of the themes/textures stay consistent - fantasy, wonder, darkness, heroism, general grandiosity...  more