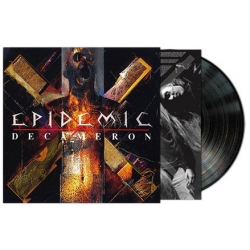 Zapytaj o produkt Poleć znajomemu Specyfikacja PDF
For the first time on vinyl, a long forgotten gem. The Crushing and very underrated second album from Decameron is the second studio album by San Francisco Bay thrash metal band Epidemic. It was released in 1992 and is considered by many fans as Epidemic's best work.

The band went on a two week East Coast tour with Malevolent Creation and Suffocation in December 1992 to support it, and eight weeks later headed out on a nationwide tour with Cannibal Corpse and Unleashed in early 1993. Epidemic gained considerable exposure as well as experience, as this was what they thought was the beginning of their touring years.

ANGEL DUST To Dust You Will Decay LP WHITE [VINYL 12"]