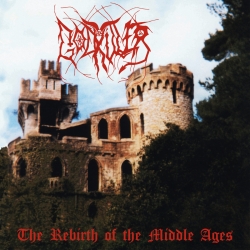 GODKILLER The Rebirth of the Middle Ages [CD]

2021 CD reissue of the 1996 debut of cult classic medieval black metal mastery from Monaco's Godkiller.
A prime example of finely crafted, grandiose yet raw mid-90s Black Metal, the release creatively developed out of 1995's demo, The Warlord (incorporating music from that release, with anti-Christian themes prevalent throughout and an overall concept of the battle between good and evil).
With a cold, stripped down production, plus triumphantly dark yet epic riffs mixed with tortured vocals and highly effective synthesizer melodies, the EP evokes a strong Medieval atmosphere throughout, and shows why The Rebirth of the Middle Ages is still highly regarded as a glorious touch of darkness from the past.
Presented with its original artwork, plus lyrics. Remastered by Godkiller’s Duke Satanaël himself.
Klienci zakupili także

REVOLTING Visages Of The Unspeakable [CD]

SUMMONING With Doom We Come [CD]