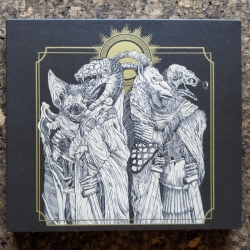 IDOLATRIA hail from Italy, and are one of the black metal scene's best-kept secrets. With absolutely no warning whatsoever, the quartet released their debut album, Breviarium Daemonicus Idolatrorum, in early 2015. This bolt-from-the-blue work portrayed a dazzling(ly dark) artistry, a gnarled 'n' gnarling physicality that proved mature beyond its years. More so, perhaps, it underlined the fact that IDOLATRIA are not ones for half-measures: each and every aesthetic choice is decisive and deadly, every thread sewn together with austere intent.

Such proves the case again - and, it must be said, to an even fuller degree - with IDOLATRIA's long-awaited second album, Tetrabestiarchy. Right from the very first ominous notes, one is immediately presented with a world towering in its immensity, black metal that's as martial as it is mesmerizing, drawing that listener in and devouring him whole. Orthodox but by no means short on vision, IDOLATRIA's songwriting sears the senses and also the spirit; their violence is surely made by humans - ones playing together, unlike so much cut 'n' paste creations in nowadays "black metal" - but Tetrabestiarchy equally transcends the earthly realm. Its lurking dread knows no bounds, and the corridors of the consciousness it opens up are many and malignant...

Naturally for IDOLATRIA, Tetrabestiarchy is built upon a foundation of great thematic significance. Across its six-song/34-minute runtime (which amazingly feels far vaster than that), the album outlines a journey through some interesting animalistic myths, which have been (and some still are) a focus in various cultures. The recurrent themes are the nihilistic vision of a decadent world based on worshipping Satan as the only true god and the interpretations of such myths as tools to annihilate other religions.

The description of these four animals are inspired by a porphyry sculpture, dating from around 300 AD, called The Portrait of the Four Tetrarchs. It depicts the four rulers in charge of the entire Empire, instituted by Emperor Diocletian. The sculptural group has been fixed to a corner of the façade of St Mark's Basilica in Venice, Italy since the Middle Ages. It probably originally formed part of the decorations of the Philadelphion in Constantinople, and was removed to Venice in 1204 or soon after.

Graced with suitably grandiose cover artwork courtesy of Cold Poison, IDOLATRIA's Tetrabestiarchy throws down the gauntlet for serious black metal artistry. Behold its brilliance and cower before its magnitude!

INHUME Decomposing From Inside [CD]