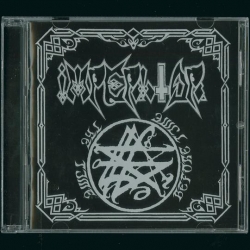 IMPERATOR The Time Before Time [CD]

The story of Imperator is one that should not be entirely surprising, considering the band’s emergence in the Eastern Bloc country of Poland during the waning years of the Cold War and amid its oppressive effects in the region. The gifting of a primitive acoustic guitar to founding member Bariel by way of his mother in the summer of 1983 set into motion a series of events that would lead to the band’s formation in September of that year. Fifteen years old at the time, Bariel befriended a classmate that month at his new high school, invited his collaboration, and chose the name Imperator (Polish for “emperor”) for his “Speed Black Metal” band as a fitting reference to the brutality of the Russian czars and emperors, whose tyranny had in part led to Poland’s then-current state of affairs. A series of lineup changes occurred in the band’s formative years, during which they recorded their first demo, “Endless Sacrifice” (1987), whose distribution gained Imperator some degree of international recognition. A second live demo, entitled “Deathlive,” and the band’s third demo, “Eternal Might,” were released over the next two years as well. During this time, Bariel had developed a friendship with both Dead and Euronymous from Mayhem (Norway), which serves as a testament to the admiration the band had begun to garner in Europe despite its relative obscurity. In fact, Bariel was invited to play in another of Dead’s bands, The Moon, and Euronymous offered to release Imperator’s first full-length recording on his infamous Deathlike Silence label. However, undisclosed circumstances led to the unfulfillment of this plan, and the lone Imperator album, “The Time Before Time,” was instead released in 1991 by a Polish label named Faceless Productions, which in its existence released only one other demo cassette from another band. Due to the obscurity of the label, a complete lack of promotion, and the fact that it was only released on vinyl during the heyday of CDs, “The Time Before Time” was not given its full due. Since then, it has been released on CD and cassette a few times on different labels, the most notable of which was the Pagan Records CD from 1997. Nuclear War Now! Productions is proud to once again offer this gem of early Polish death black metal with, in addition to CD and cassette versions, the first-ever vinyl reissue on LP with a bonus 7” containing two bonus tracks recorded on Easter of 1993, following the band’s reunification after a hiatus of several months. “The Time Before Time” is perfectly characterized as an archetype of the sound that tended to emanate from the Eastern European extreme metal scene of the time. It features varying tempos that change abruptly, uniquely unorthodox riff progressions, a healthy dose of tremolo-bar-infused guitar leads, and Bariel’s gruffly barked vocals. This NWN! reissue also includes extensive liner notes written by Bariel himself and a layout that features the original artwork of P. Szymaniak, whose designs also adorned the work of Pandemonium, a contemporaneous compatriot of Imperator’s in Poland. In this most recent of Nuclear War Now’s ongoing efforts to reissue all-but-forgotten metal obscurities from this time and region, it is hoped that “The Time Before Time” will receive the recognition it deserved upon its original release.
Klienci zakupili także

ULCERATE Of Fracture And Failure [CD]

THE RUINS OF BEVERAST Rain Upon The Impure DIGIPAK [CD]