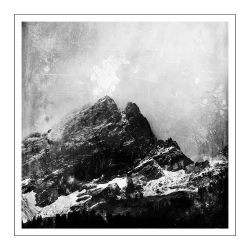 Québec-based black metal two piece, Janvier, released their eponymous debut in the winter of 2017. Releasing an album in the dead of winter and naming your band after one of the winter months are two small ways to give listeners an inkling of what to expect, but Janvier doesn't stop with just titles and imagery. Indeed, their four track debut embodies the whipping winds and cold, snow-clad landscapes of the northern winters. Rather than just evoking the imagery, the band placed the sound of blowing winds throughout the entire album; not just intros and outros, but every second is backed by heavy, shrieking winds.

For the most part, Janvier presents its cold black metal in the form of slow moving pieces, bristling with stark guitar melodies and slow moving percussion. The production is sharp, yet the music is delivered with an earthen tone. The vocals are pained and tormented, offering a chilling (pun intended) counterpoint to the instrumentation. The guitars take center stage, delivering nicely crafted,yet monotonous trem riffs mixed with passages of simplistic minor key chords. Though the music is often presented in a slow moving fashion, a flurry of speed and intensity, with double kicks and faster riffing, come in towards the end of the third track and continue into the beginning of the fourth track. Ultimately, this burst slows down as the album trails out, but it's a nice change of pace after the slow and atmospheric beginning.

Janvier succeeded in release one of the coldest sounding albums of the winter. The blustery music combined with whipping winds and tormented vocals offer a bleak look into the nature of Québec's winters. While it's a pretty neat debut, there is clearly room for Janvier to grow. Perhaps the band could continue to capitalize on their cold, depressive sounds while focusing the songwriting into something more immediately gripping. Regardless, it's a fine way to mentally cool off during the warm summer months while looking towards the ice and snow to come.

Written for The Metal Observer.