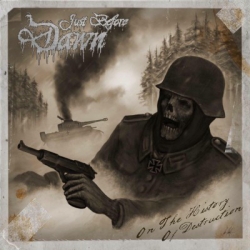 JUST BEFORE DAWN On The History Of Destruction [CD]

DARK SYMPHONIES / THE CRYPT is generally known for only reissuing classic 80's / 90's releases, but this would definitely be one of those very rare exceptions. We are proud to announce our cooperation with International super group JUST BEFORE DAWN to release their latest offering "On the History of Destruction" which will include 3 brand new tracks, re-recordings of 2 old tracks, a Bolt Thrower Tribute, 2 unreleased tracks from the archives and a Hail of Bullets cover.

The band was founded by Anders Biazzi (Amon Amarth, Blood Mortized) in the summer of 2012 , Rogga Johansson (Paganizer, Revoling, The Grotesquery...) joined in some months later. It was meant to be a 2 man project, Anders writing the music and Rogga doing the Screams and writing the lyrics. But soon after more and more got involved in the project! Names like Dave Ingram, Jonas Stålhammar, Johan Jansson, Rick Rozz, Marc Grewe, Jonny Petterson, Håkan Stuvemark, Brynjar Helgetun, Jonas Lindblood, Rai Wolters, Ralf Hauber and many many more! So far the band has released 2 Full-lengths and one EP on Chaos records!

Now the project is driven by Anders Biazzi, Jonny Petterson and the drummer Brynjar Helgetun! Music in the veins of Bolt Thrower / Hail of Bullets and Hypocrisy! Includes liner notes from original founding member Anders Biazzi.

CD limited to 1000 copies worldwide! Stay away from BOOTLEGS! Support the band and official releases!!

PRIMORDIAL To The Nameless Dead [CD]

HAUNTED CENOTAPH Nightmares From Beyond [CD]