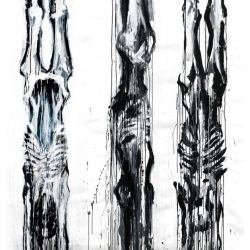 in conspiracy with Cloven Hoof Brewing & Releasing limited to 300 copies.

At long last, the wait is over! The debut full-length of KNOKKELKLANG is finally due!
‘Jeg Begraver’ offers 40 minutes of chilling melancholy and bleakness in the by now infamous Knokkelklang vein. For those familiar with the previous demo outlets, the band continues on the same path only perfecting the sound and songwriting, like this astonishingly dynamic, over 20 minutes long song this sample is taken from.
An amazing release, through and through. It’s an honor to be a part of this.
Released by Terratur Possessions exclusively.