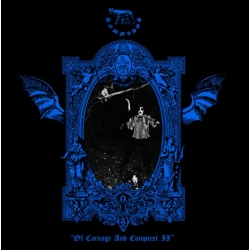 This is a compilation CD of the 3rd and 4th Kommodus demos, "From The Ashes Of Empire " & "An Imperial Sun Rises ".
Raw unapologetic Black Metal might!
This CD is limited to 500 copies.

A few words from the band on each demo:
"From The Ashes Of Empire": The black metal contained within this third demonstration weaves a yearning of a romanticised, ancient past, a bitter resentment of the present, and a thoroughly pessimistic outlook on the future. It is often prophesised that we are living in the end times, and scientifically all evidence corroborates this. When taking even a cursory glance at the contemporary world around us, I can’t help but agree. The widespread erosion of culture, of identity, of tradition. Opposing opinion to the rhetoric of the day deemed anathema. Social and political efforts so preposterous they’d be humorous if not considered dogma by their evangelical espousers and the pandering culture which dotes upon them. With no great war, colossal disaster, or widespread disease to confront or purge us, we internally conflict, theorise, and exacerbate everything we can, desperate for some great crusade to assign our lives and time purpose and meaning. There is none. The planet is subject to the siege of overpopulation, industry, pollution, and the relentless expending of its finite resources. And we suffer the reaction, as Earth seeks to cure that which ails it. Like crops in bad soil, we are growing weaker, increasingly troubled, and afflicted. With mental illnesses and suicide rates escalating dramatically in ostensibly the most civilised, progressive, and peaceful era our species has known, I draw no other conclusions. We are dispossessed, we are disenfranchised, and we are displaced. We can contest this, we can learn, grow, and conquer in our twilight, and we should. But the fact remains, humanity no longer fits. And so here I offer eight hymns which reflect back to our golden standard, and which also howl and cackle in the face of our inevitable, impending oblivion.

"An Imperial Sun Rises": When I think of Yukio Mishima, I think of one word: discipline. Here’s a man who never missed a deadline for his writing, or art. A man who identified the physical weakness within himself and sought to crush it.
In his short lifetime he left a body of work, a legacy that contained 35 novels, 25 plays, 200 short stories, and 8 volumes of essays. An amazing bibliography that assured him a place as Japan’s most celebrated author. An athlete who forged himself a new body from sun and steel. A pariah who disregarded the zeitgeist of his era – the erosion of Japanese tradition and the cultural pressures to transform the country into an emasculated leftist shadow of its former self. He contested his surroundings and matched his words with action, transforming his world to reflect his art. Training religiously, forming a militia, and ultimately immortalising himself through his work and through his death. Total commitment, total belief. Mishima had the drive and vision to make a poem out of his life. And in our contemporary era I think there is much to learn from him. To attempt to attain and exercise that same monastic drive in our own chosen paths. To have the sheer will and faith in ourselves to ignore all the ephemeral influences, distractions, and rabbit holes that are shoved down our throats, that obscure our focus, and derail our progress. To recognise and understand what it is we want and attain it, to attack it mercilessly until we are synonymous with it. How can we change the world if we can’t first change ourselves with discipline, determination and steadfast focus?
News, politics, social rhetoric and trends it’s all agenda and half-truths. Instead, we need the glorious sun, that defined our earliest incarnation of gods and goddesses. We need the steel to make us stronger and conquer. We need Mishima.

KOMMODUS Of Carnage And Conquest [CD]