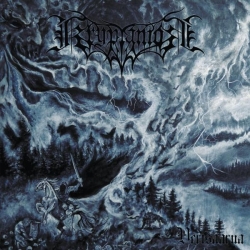 KRYPTAMOK burst forth from the void in 2018 with their first demo, Profaani. Although that was the entity's first public recording, KRYPTAMOK is the work of Hex Inferi, a veteran of the always fertile Finnish black metal underground, having played in Vordven in the late '90s and early 2000s and more recently as bassist of the institutional Horna. Not surprisingly, Profaani burned with an icy fury that was 100% Finnish in constitution and execution.

Taking bolder strides on their debut full-length, KRYPTAMOK stake a claim for scene supremacy with Verisaarna. Immediately and irrevocably, here does Hex Inferi unload an arsenal of quintessentially Finnish classicism: blazing passion pitted against cryogenic melody, filthy thrust imbued with nightsky atmosphere. Pure and total FINNISH BLACK METAL, basically - no more, but definitely no less! However, KRYPTAMOK show more sides to this Finnish face across the album's 38-minute runtime, revealing an utterly epic and equally haunting aspect compared to his no-less-distinguished contemporaries. Elsewhere, the mainman ramps up the rage and violence, sharpening his swords to a stultifying degree; the anger is palpable, and dangerous.

In the band's own words, Profaani was mere foreplay compared to Verisaana's main event of barbaric onslaught and ruthless hatred. KRYPTAMOK hereby present eight new sermons, like eight daggers thrust into the heart of rotting Jehova...eight new spears driven into the ribs of the false prophet!
Pozostałe produkty z kategorii