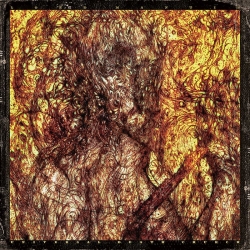 With guitarist Ken Sorceron of Abigail Williams fame (who also joined LORD MANTIS on "Death Mask") and new drummer Bryce Butler, along with honorary vocalist/member Dylan O'Toole of Indian, "Universal Death Church" is the result of a band who has overcome dark and chaotic chapters and bitter internal feuds to set out once again to raise the bar of extreme music after the suicide of a key founding member in the ranks.

"Universal Death Church" sees LORD MANTIS with a new sense of purpose and focus.  More developed and immeasurable, vast and towering, "Universal Death Church" continues the doomed and blackened depraved metal paradigm that has become the signature resonating palpitation surrounding the LORD MANTIS sound.  The threading between punishing, torturous yet direct and at times tangible industrial-influenced riffing with the more abstract, dark, blackened surreal-like crawling and swift passages paint a new disturbing sonic portrait for the band. The renewed union of LORD MANTIS became akin to that of repairing tissue of an unnamable and vile organism.  Leveling up the beast.

Having that infamous reputation of being one of the more vexed acts within the extreme metal scene, as amassed on previous releases such as 2012?s "Pervertor" and most-notably their 2014 controversial "Death Mask" LP, "Universal Death Church" ups the LORD MANTIS ante in pretty much every category; the intensity, darkness, heaviness, and of course the deviance and degeneracy.

THE RUINS OF BEVERAST Unlock The Shrine [CD]

VIA SINISTRA Via Sinistra [CD]