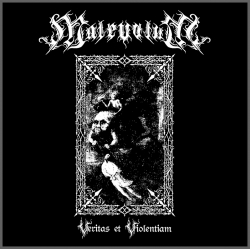 Throughout the last decade, it has been virtually impossible to follow the most subterranean fields of the Black Metal Underground without acknowledging the Bosnian presence and importance on such scenery. The Black Plague Circle has remained a cauldron of dismal, obscure sonic terror thru a body of high-quality projects and superior releases. One of the names belonging to this conclave is Sarajevo's Malevolum. With its second offering, “Veritas et Violentiam”, this entity carries on the route set by 2018's “In Absentia Lucis”, nevertheless in a furthermore intense, oppressive way. Undeniably, the four lengthy songs here burst with an impenetrable fog, an almost suffocating aura of dread, penetrating somber Black Metal centering its delivery on outright shadowy negative riffs along with nearly ceremonial vocals, expressive and ritualistic, an obsessive performance which effectively adds to the aforementioned oppressive and cruel aura. Sonically as well as visually, “Veritas et Violentiam” entirely showcases the shrouded character of these tracks. It surely feels as if the music is being summoned from a dark tomb, a sepulchral quality that extends to the ghastly and decidedly inspired artwork, a visceral and emblematic creation, vivid and symbolic in equal measures.
Out through Black Gangrene Productions on a vinyl LP edition, “Veritas et Violentiam” is a testimony of Black Metal eminence which sees Malevolum escorting the listener on a treacherous journey.
Pozostałe produkty z kategorii

THE BLACK The Priest of Satan LP , BLACK [VINYL 12]