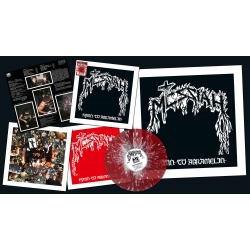 original mix with all interludes between the Songs! Original 1986 sound !!! Specially mastered for vinyl !!!

Switzerland has a lot more to offer than chocolate and cheese. Just think about legendary and groundbreaking outfits like Celtic Frost and Coroner and add your own favourite Swiss band of any flavour to the list. In the early/mid-eighties, the Swiss extreme underground was in full bloom, bringing forth venomous sprouts like Messiah from the town of Baar in the canton of Zug. Messiah helped to shape the sound of death and thrash metal in a time when distinctions between these genres had not yet been cast in stone. “Hymn to Abramelin” shows the band’s own fascination with legendary acts like Venom, early Sodom, Bathory, Sepultura, Possessed and Hellhammer. The latter ones even inspired the band to take on the name “Messiah” as a hint to Hellhammer’s “Satanic Rites” demo.
Messiah formed in 1984, consisting of vocalist Tschösi, guitarist Brögi and drummer Jazzi. After four demos which were recorded between 1984 and 1985, “Hymn to Abramelin” from 1986 was the band’s first full-length release, and it got Messiah the attention of the wider underground scene for a couple of good reasons: By the standards of the time, “Hymn to Abramelin” was extreme – extremely raw, extremely evil, and extremely brutal! Even when you listen to it now, almost thirty years later, the mean and sinister atmosphere simply grabs you by the throat. Tschösi’s vocals were one of a kind, as he had a special way of delivering his unique squeals and screams which set him apart from most other thrash/death vocalists of the time.
What you get on the record is total thrashing madness meeting slower, well-paced mid tempo moments and imaginative solos, while short spoken interludes add a very special, theatrical B-movie atmosphere to the whole record. No wonder that due to all this, “Hymn to Abramelin” is regarded as one of the cult releases from the early, formative days of death/thrash metal.
If you find the production low-fi compared to the standards of 80’s Bay- or Ruhr Area thrash, consider this: When looking for a studio to record the album, Messiah ended up at a place of which the owner had never made a metal album before, so the band had to take a crash course in recording and did everything themselves, without having the slightest experience! Their only guideline was their own taste in music, the influences they got from other bands, and their own feelings about what metal should be like. With this in mind, the significance of “Hymn to Abramelin” for the genre’s formation becomes even clearer.

After “Hymn to Abramelin“, Messiah widened their fan base with the equally cult „Extreme Cold Weather“, so that in the early 90’s, the band got signed by Noise Records, put out a number of albums and toured with Deicide until they disbanded due to artistic difficulties. The years 2003-4 saw a short-lived reunion of the band, with all but one of the original members replaced. Anyway, what is most important about Messiah is their legacy! “Hymn to Abramelin” first came out on Chainsaw Murder, a small and obscure Swiss label. The re-release by Massacre Records/Floga didn’t really do the record justice, so for those who are interested in possessing this piece of music history, here we have the 1:1 original recordings with all interludes between the songs. Being one of the formative albums for both thrash and death metal, “Hymn to Abramelin” is simply not to be missed.
Klienci zakupili także

W.A.I.L. Wisdom Through Agony Into Illumination And Lunacy (black) [VINYL 12"]