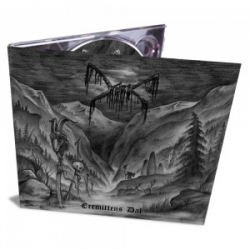 Primarily inspired by the works of Darkthrone & Burzum, Mork’s third album Eremittens Dal stands as a tribute to the spirit of old-school Norwegian Black Metal. Raw production and ice-cold riffs combine with the band's dynamic and atmospheric twists and the album effortlessly alternates between the ferocious and the melancholy. Covering themes of hate, death, seclusion and misanthropy, both lyrically and in the way that a one-man-band makes music in solitude, the music is perfectly fitting of the title (translated as Valley Of The Hermit).

Mixed by Freddy Holm at Kleiva Studio and mastered at Enormous Door in the US.

"Mork caught my attention a couple of years ago and I was immediately drawn to the atmospheric and reclusive soundscapes, enticed by the desolate and solitary approach - true to the old Norwegian Black Metal ways. It was as if I was thrown back in time. So when I got asked to add vocals on two tracks I didn't hesitate to comply, I just instantly knew I was meant to have a part in it!" - Silenoz (Dimmu Borgir)

"Many have tried, many have failed. Mork nails it.” - Nocturno Culto (Darkthrone)

AKHLYS The Dreaming I , PRE-ORDER [CD]