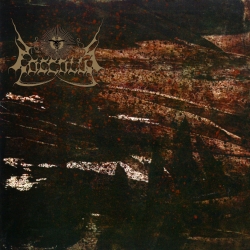 Zapytaj o produkt Poleć znajomemu Specyfikacja PDF
INFERNA PROFUNDUS RECORDS is proud to present another piece of Baltic black metal history. In Lithuania, the historical black metal trident of the nineties has always been OBTEST, NAHASH and DISSIMULATION - alongside these realities, however, there was another mysterious entity called POCCOLUS. The band has often remained in the shadows of the underground because it did not do many live performances and its discography counts only one full-album, the homonymous "Poccolus". This black gem released in 1996 is undoubtedly still one of the pillars of Lithuanian metal history. A majestic and epic record, but at the same time veined with a dark melancholy that catapults the listener into the mysterious eras of bloody battles and legends of Baltic mythology. The album "Poccolus" is a rare example of what was the real and genuine “pagan black metal” - no cheerful melodies and alleged vikings with long blond braids chasing dragons in the woods - in this album a hostile and icy shadow reigns looming as a bloody sword after a battle to the death. A raw and icy production does not take away the power and majesty of this work which after almost 25 years manages to be still so evocative and addictive. The album was initially released in CD format by Hammerheart Production and in 2006 re-released by Supernal Music. Now, for the first time finally you can rediscover this dark jewel in double LP version (and digipack CD) which will be released on May 29th, 2020. From the ominous past, through the screams of blood-thirsty werewolves, the charm of distant majestic eras reaches us again ...

“I'm alone in the woods among the shades of trees,
The wind rises, wolves roar in the distance.
In the ligh of the full moon, images blend,
The transformation into a wolf through a terrible howl.”

TWILIGHT ...And With The Twilight, They Return LP [VINYL 12"]

INFERNAL MAJESTY Unholier Than Thou [CD]

THE RITE Liturgy of the Black [CD]