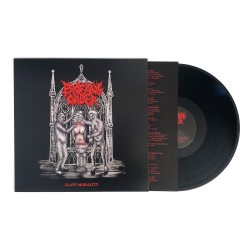 Black vinyl only housed in a heavy single-pocket jacket with black flood inside, insert, download card and hype sticker.

Test pressings for sale: only five were ever made, two were given to the band, and the other three are available for sale here.

On their bludgeoning debut LP "Slave Morality" Canadian terror cult Profane Order unleash a sonic armageddon of implausible proportions that will stand high as one of the most uncompromising displays of aural terrorism to see the light in 2019. After a debut full-length and a followup EP, with this brand new sophomore LP of monumental violence Profane Order have sealed their most abominable and aberrant pact with complete chaos and ruin so far, and conceived a work which will elevate the band’s reputation as an embodiment of complete terror at a whole new height, consecrating them as a complete aberration of creation. "Slave Morality" sees the band and their horrid sonic apocalypse come full circle and blossom into the weapon of mass destruction it had always prophesied it would become on past releases, standing as their most accomplished and merciless work to date as well as establishing them as an absolute threat in the Canadian extreme underground and beyond. Fusing the cold and malefic grimness of black metal with the most bludgeoning strains of death metal and the blind terror of grindcore, with "Slave Morality" Profane Order pay homage to long time war metal cults like Archgoat, Blasphemy, and Conqueror, while crossing new and never before seen thresholds of musical barbarism, extremizing the sub-genre even further and standing as a monument to violence and negativity entirely their own.

Digital download included with the purchase of physical copies.