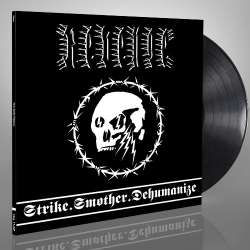 Canadian Chaos Black Metal extremists REVENGE return with ‘Strike.Smother.Dehumanize', the follow up to their 2015 album ‘Behold.Total.Rejection’. Being called complete noise by some, and total genius by others, these polarized views continue to be worn by the band as a badge of honour. On ‘Strike.Smother.Dehumanize’, leader J. Read has eclipsed all past releases. With an extremely potent and organic production, lightning speed, chaotic song structures and razor sharp vocals delivered with unparalleled conviction the black metal outfit has constructed a manifesto of self-ascension, absolute hatred of organized religion, and total contempt for the enslaved modern man that feeds at the trough of mediocrity with every waking breath. The destruction and rebuilding of humanity is the only cure for the cancer known as mankind. No Scene No Brotherhood No Remorse.