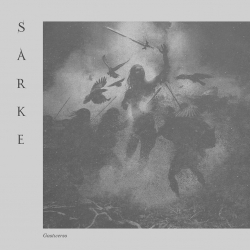 With the legends Sarke and Nocturno Culto in the line-up, a discography of worldwide praised albums and an ever growing and evolving grim, dark and soothing sound, the next SARKE album “Gastwerso” is yet another great piece of icy and haunting black metal.

Sarke formed in 2008 when Thomas "Sarke" Bergli (Khold, Tulus) decided to make a solo album, one year later the debut album was released via Indie Recordings, and Sarke had teamed up with keyboardist Anders Hunstad and Ted "Nocturno Culto" Skjellum (Darkthrone, ex-Satyricon) on vocals. The debut album Vorunah resulted in several festival appearances such as Wacken Open Air (with the guest appearance of Thomas Gabriel Fischer), Inferno Festival, Hole in the Sky, Party.San Open Air, Brutal Assault and Ragnarök Festival.

After the flying start, Sarke continued to take the listener on a journey through dark and soothing soundscapes inspired by legends like Mayhem, Slayer, Darkthrone, Celtic Frost, Black Sabbath, Candlemass, Death, Motorhead and Kreator. With their 5 full lengths in the discography, Sarke has been praised repeatedly in press and by fans worldwide.

On the coming album “Gastwerso” you can still hear the musical tree of SARKE continuing to grow with new branches. New challenging riffs, melodic side roads, beautiful, dark, raw and groovy. Like on all albums before, 70’s rockhead Lars Erik Westby has been in charge of the production. Gastwerso was recorded and mixed at H-10 Production in Oslo, Norway.

REPUKED Up from the sewers [CD]