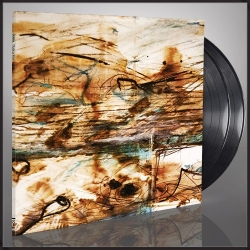 Black 12" double vinyl (33 rpm) in deluxe gatefold printed on the rough side of the board. Fifth pressing 250 copies worldwide.

Originally released in 2002, ‘Í Blóði Og Anda’ (meaning 'In Blood and Spirit') is the long-lost debut album from Iceland's SOLSTAFIR. A far cry from the refined and expressive post-rock of 2011's 'Svartir Sandar', ‘Í Blóði Og Anda’ is unique and primitive black metal (in the vein of early ENSLAVED). The album went out-of-print almost immediately upon its release, and has been out of circulation ever since. Now remastered, repackaged, ‘Í Blóði Og Anda’ is a definitive snapshot that exposes the earliest roots of this incredible band.

Recommended if You Like: ENSLAVED, BARONESS, MASTODON, AGALLOCH, LONGDISTANCECALLING, PRIMORDIAL.

BATHORY Under the Sign of the Black Mark TAPE [MC]