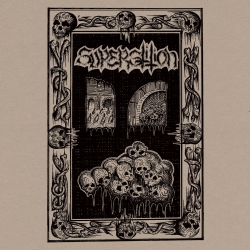 Despite the explosive re-emergence of Death Metal during the last 10 or so years, few bands in the U.S. have sought to carry on the faithful legacy of early evil in American Death Metal in a manner that wasn’t a pale forgery. To that end, Superstition manifest from the ancient landscape of New Mexico with their debut ‘Surging Throng Of Evil’s Might’ , heralding the return of perdition’s flame.

Unpolished malevolence dripping with vile iniquity, occultic force and eerie demonic sentience is draped across the audial essence of Superstition’s debut, from the hellish introduction of ‘Death’s Fuming Passage’ to the closing keys of ‘Grave Portals’. The very primordial elements of the abyssic fire are summoned in Superstition’s ancient invocation.

Ready to pierce the sacrificial lamb and open the gates in the U.S and beyond, Superstition presage the permanence of darkness in the material plane this Summer on tour with Spectral Voice and Mortiferum. The ‘Surging Throng Of Evil’s Might’ is only the beginning to the plague of the Superstition…