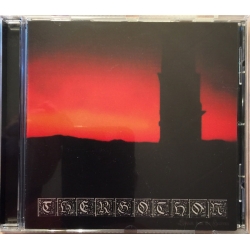 THERGOTHON Stream From The Heavens [CD]

Zapytaj o produkt Poleć znajomemu Specyfikacja PDF
Thergothon, from Finland, was formed in late 1990 by Niko Skorpio Sirkiä (vocals, keyboard), Jori Sjöroos (drums) and Mikko Ruotsalainen (guitar). They started life as a death metal act, progressing to slow, seriously heavy doom metal, later becoming classified as pure sadness & despair in musical form. In early 1991 they recruited a local friend Sami Kaveri as a second guitarist & it was in November 1991 that the 'Fhtagn-nagh Yog-Sothoth' demo tape was recorded, inspired by H.P. Lovecraft's Cthulhu Mythos.
In Autumn 1992 Thergothon started recording their debut album, 'Stream from the Heavens'. Two tracks from the Fhtagn-nagh Yog-Sothoth demo were reworked & recorded for this release. Non-metal influences including prog, goth, ambient & experimental music helped to shape the band?s sound & atmosphere further.
Thergothon disbanded in 1993, before the eventual 1994 release of 'Stream From the Heavens' though over the years the band has earned a cult status in the underground through this single album. In the mid-later part of the 90's the "Funeral Doom" genre emerged. Thergothon was deemed as one of the originators of the sound & style and an important cornerstone for the whole genre.
"If you are a fan of slow, depressing doom music, you should own this album". Doom-Metal.com
1. Everlasting
2. Yet The Watchers Guard
3. The Unknown Kadeth In The Cold Waste
4. Elemental
5. Who Rides The Astral Wings
6. Crying Blood & Crimson Snow
Klienci zakupili także

WITH THE END IN MIND Tides of Fire DIGIPAK [CD]

SACROSANCT Truth is What Is [CD]