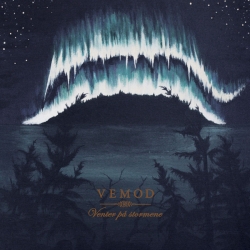 Zapytaj o produkt Poleć znajomemu Specyfikacja PDF
Vemod from Trondheim/Norway are one of the most promising and visionary bands of the vibrant, eclectic contemporary metal underground and have already made quite an impact in well-informed circles. Combining such diverse influences as Ulver, Dead Can Dance, Brian Eno and Paysage d'Hiver, the three musicians pursue a unique musical and aesthetical approach, thus reaching a distinct expression and atmosphere at an early stage of their career.
Vemod's first full length album "Venter På Stormene" (English: "waiting for the storms") was originally released in 2012 and is now reissued by Prophecy on a larger scale. Separated into the two parts "Over jord, vandrende" ("throughout the earth, wandering") and "Over himmel, flammende" ("throughout the heavens, flaming"), the album is conceived as a twofold manifestation of inner movements and a rising star, a contemplation upon the yet-again-sacred. The marriage of dark ethereal metal and atmospheric ambient soundscapes celebrates and cultivates the Vemodian essence within the realms of deep feeling: the result after years of slow but steady maturation and a bridge towards the future. Beyond sun and moon, we are born anew.
Klienci zakupili także

THE RITE Liturgy of the Black [CD]

THE BLACK Alongside Death [CD]