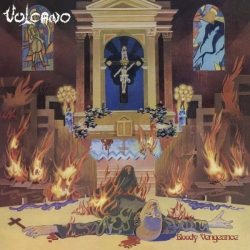 Zapytaj o produkt Poleć znajomemu Specyfikacja PDF
Brazil’s Metal landscape is mostly known for the scene that brought to the world extreme metal titans such as Sepultura and Sarcófago. Those two, despite their legendary status, can’t really be listed as the earliest purveyors of Brazil’s barbaric, caveman Metal of the early 80’s. That honour belongs to a very small group of bands, of which Vulcano is the most prominent. The band’s first full-length studio album, Bloody Vengeance, is arguably one of the earliest documents of a Death/Black Metal scene that would eventually explode in Brazil, and later worldwide. A Satanic chaotic wild ride, Bloody Vengeance was first released in 1986 and has since become nothing less than a classic. Now available on CD and vinyl via Greyhaze Records, and in celebration of the 30th anniversary of its release, the album is presented in a completely audio-visual restored state. This means that those interested in this early influential band can now enjoy their debut album in the exact same way as in the original release through pristine, high-fidelity audio. The album’s artwork was also restored to deliver a crisp depiction of all original album graphic elements. Vulcano’s Bloody Vengeance is an essential addition to any true Metal fan’s collection. It is right up the alley of those into early Sepultura, Sarcófago, Nifelheim and Black Witchery.
Klienci zakupili także