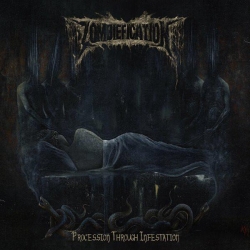 Zapytaj o produkt Poleć znajomemu Specyfikacja PDF
Although they possess a whole ton of the elements that make for a Swedish death metal worship band, drowning in nostalgia for those early 90s classics ala Left Hand Path, Dark Recollections, Like an Everflowing Stream, and Clandestine, I thought it was interesting to watch the development of Zombiefication, being one of the rare Central American bands to adopt that sound, whereas so many of their peers are straight from Europe. And truth be hold, there was a sizable payoff when the band's 2013 sophomore full-length At the Caves of Eternal proved a notable improvement over their 2010 debut Midnight Stench in every category: the production, the musicianship, the songwriting potential. Fairly hot on the heels of that record, they released Procession Through Infestation
Pozostałe produkty z kategorii